Earlier this year I started a photography project called Femme et vélo with my second shooter Mike Andrick. FEV is essentially a fashion editorial project that brings together women and bicycles. The idea for the project came about when Mike and I were discussing old photographs we had seen of Marilyn Monroe and Audrey Hepburn on bikes and thought how great it would be to recreate similar moments with models and vintage bicycles. We ended up meeting Shari who signed on as our wonderfully talented stylist. Without her I feel this project would have ended after only a few shoots. Shari owns a beautiful vintage clothing store called Charm School Vintage on Cesar Chavez. If you live in Austin, you should definitely check it out.

As for working on this project, I’m excited to be learning about a different approach and style to photography while having the opportunity to use several film cameras I’ve acquired over the past year including a Mamiya C330 and a Canon AE-1. Together we’ve been kicked out of a golf course and abandoned parking lot, I ripped a good pair of jeans hopping over fences, and we’ve had a couple of fantastic post-photo shoot soirees together. And it’s all been incredibly fun! This prompted me to post a collection of photos I’ve taken to celebrate what we’ve accomplished so far together. Don’t forget to check out Mike’s photos as well on the tumblr site! 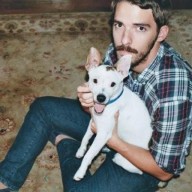